Not too much more than 2 weeks until I`ll be flying to Torshavn in the Faroe Islands for the opening of my exhibition there. Here`s what I`ve been compiling as publicity:
I originally trained as a sculptor at Gray`s school of Art in Aberdeen. Since 2000 I have lived with my family at the edge of a large forest, alongside the river Tweed in the Scottish Borders. I focus on figurative wood sculpture in native Scottish hardwoods; storm damage salvaged from local forests. Sculpting in wood takes a lot of time and energy, so I also use lino printing as a more immediate medium through which to tell stories. I like the processes involved and the surprise at the end when I finally peel the printed paper from the lino block. A black and white lino print reminds me of the printed page in a (large) storybook.
In 2017  I made a series of prints telling visual stories about the landscape, wild nature, towns and people of the Tweed Valley.
Then I turned my attention to my mother`s Faroese heritage. She [Marjun Johannesson] and her family moved to Aberdeen when she was still quite young and yet the Faroe Islands, the language and its people have never left her. She has communicated this great love to us throughout our lives. 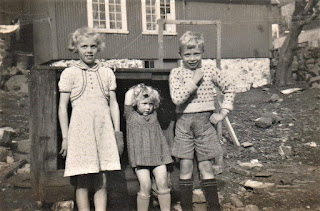 The Faroe Islands. There is a "before" and "after" to this series of seven prints. I had long conversations with my mother, listening to and absorbing her memories of childhood in the Faroes. I listened, and sketched, and we virtual-toured her village in Eysturoy using Google street view, looking for where her mother`s house would`ve been,  the soldiers` nissen huts, the jetty from which her father would jump onto the morning boat. And so I imagined 1940s Søldarfjørður into life, including 7 representations of my mum with her brothers and sisters, in the form of Oystercatchers, some in shadow (those who had passed away), some in light.
Seven brothers and sisters. Seven prints. 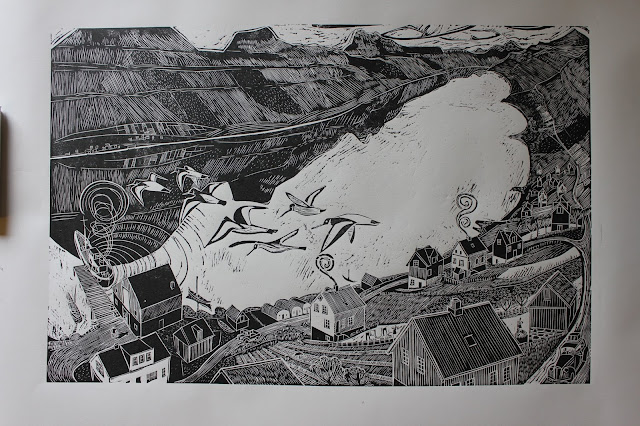 The first 3 prints [Bringsnagøta, Eystaravág, Søldarfjørður] looked to the past in this way.
Then in April 2019 I visited Faroe (for the first time in decades) and absorbed all I saw like a sponge. My brother patiently drove me back and forth, pointing out features I`d never have noticed as a visitor, such as the pool where children swim and play in boats during the summer months (in Gjógv) , or that (at Thórshavnar Skipasmiðja / Mest)  for many years an old air raid siren would sound, punctuating the working day.

On reflection, my print of Bøur might represent my mother`s little brother; this is the one image containing no human presence, other than the churchyard, and Haldor passed away at such a young age that his life`s story had not reached further than its first paragraph. 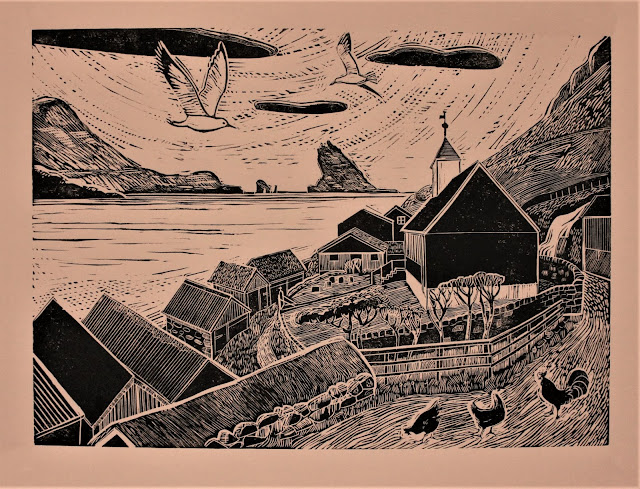 As well as family memories I have tried to communicate how it has felt to see these incredible Faroese landscapes: a Scotsman`s impressions of otherworldly sea stacks and mountains, bright orderly villages hugging the seashore. The wildness of these places, so different to the Tweed Valley! 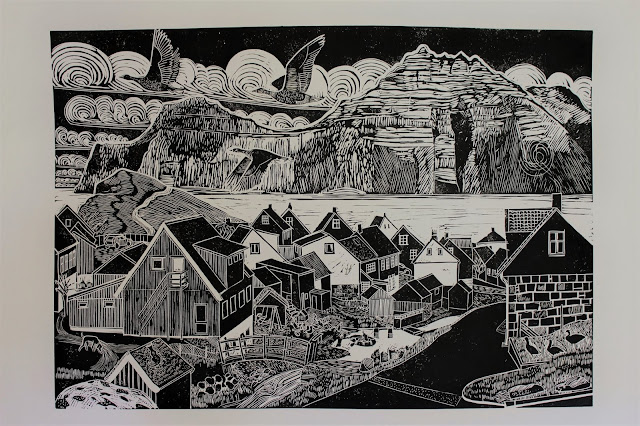 The final print, of the schooner Norðlýsið passing the sea cliffs at Vestmanna, belongs both to the past and the future. Perhaps one day I`ll experience this trip myself. But I`m also very aware that my grandmother`s first husband, along with many men from Søldarfjørður, lost his life in a similar boat, Immanuel, in a sea storm off Iceland back in 193 …. The fateful event which then led to my grandfather meeting and falling in love with this young widow with three children. Which in due course led to the birth of my own mother. And which, in time, gave life to me.

A "wild" element seems to be a common thread running through much of my work: print and sculpture; often in the form of birds (those free-est of creatures). Geese, arctic terns, fulmars, peregrine falcons, eagles. Like Phillip Pullman`s daemons, or manifestations of shamanism, or symbols of the Holy Spirit. Perhaps, to me, they are a counter balance to all our rationalism, technology and busy-ness. 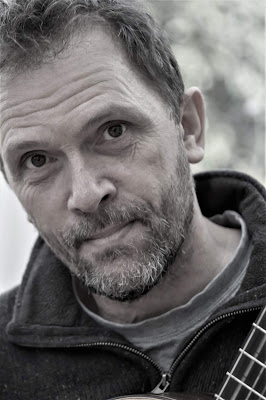 A curious orange glow an hour before sunset, setting off the russet in the beech and oak leaves, and in the bracken hill cover. And, If... 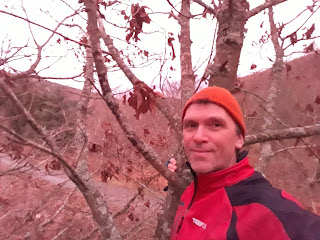